Interview to Dr Abraham Weizfeld , after Trump declaretion on Jerusalem 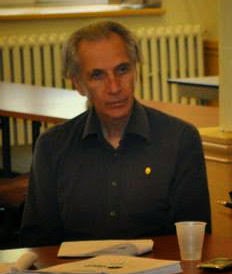 Dr. Abraham Weizfeld B.Sc., M.A., Ph.D. cand., is an activist, since 1967, with Palestinian and socialist movements in Canada and Québec, including periods in Toronto, Waterloo (1970 – 75), Ottawa (1982 – 85), and Montréal (1986 – ). Raised in a refugee Jewish family of parents who escaped the ghettos of Warsaw and Lublin, he carries the heritage of the Jewish Workers’ Bund of Warsaw; a socialist Jewish movement that contested the Zionist minority tendency in the Jewish political culture of Europe. His two published works are the documentary study Sabra and Shatila (1984, 2009) and The End of Zionism: and the liberation of the Jewish People (Clarity, 1989), an anthology of Jewish dissident writings. After meeting Yasser Arafat in Beirut during the 1980 solidarity conference, he worked as assistant to the unofficial Palestine Embassy during the first 1982-85 Israel invasion of Lebanon. His doctoral thesis, accepted by the Département de science politique at the Université du Québec à Montréal in 2005, critiqued the Hegelian concept of ‘Nation-State’. This Thesis is entitled, ‘Nation, Society and The State: the reconciliation of Palestinian and Jewish Nationhood’. As co-founder of the Alliance of Non-Zionist Jews in Toronto 1974, founder of the J-PLO (Jewish People’s Liberation Organization) in 1988, and co-founder of the Alliance of Concerned Jewish Canadians in 2005, Weizfeld works to build the international Jewish opposition.